I know it may sound so-not me but i'm going to write this post in English anyway. :D

Just minutes ago, i found we just have to blog about SONY Music Malaysia and they will be giving us two free cds! ( source )

[ I want! I want! Yea you guessed right. That's the reason i'm writing this article in English in my Chinese blog. LOL. Actually, any language is acceptable but i think English suits better. ]

How kewl and fantastic could that be?

I mean, they're giving out two totally FREE CDS! Just by blogging about them. And their facebook fan page. This is SO easy. Every one can do it.

If you don't already know, music has always been part of my life. I heart music. If i am deaf for the rest of my life, i don't know how could i survive without music. ( Seriously! Life without music is not a life. :p )

I still remember that my own first album i ever had have is M2M's Shades of Purple. It was given by my friend, Hui Wen back when i was thirteen then. She says she knows i like M2M and she has the album herself so she copied one to me without me asking for it. Yea, the first album i owned is just a copied cd without any case and package and everything.

Right until now, i have not been purchasing the cds i would love to have one. Simply because one cd costs too much for a student like me. Range from RM40-60 for one. You know, that amount of money could be nearly two months of my pocket money. I could have bought two months of breakfast at school with that money.

I would not wanted and do not intend to buy a pirated cd at pasar malam or wherever selling pirated cds either. I know i could not give supports to my favorite singers by buying their albums but i know more that the least i can do to show my supports to them is to anti pirated cds.

So, you can imagine how jubilant am i when i first heard of the good news. It is probably the most wonderful news i have ever ever ever heard.

Thanks to my habit of reading local newspaper SinChew Entertainment every day, i already recognized a couple of singers for whom of which are under Sony Music. Rainie Yang, LeeHom Wong, Faye Wong, Jay Chou, Jolin Tsai, Coco Lee, Joanna Wang and more ( i couldn't remember their names now -_- ).

[ Too bad they don't have Taylor Swift. Hehe. ] 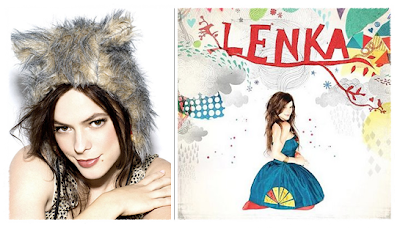 Lenka by Lenka. My all-time favorite album. I'm loving every single song in it. 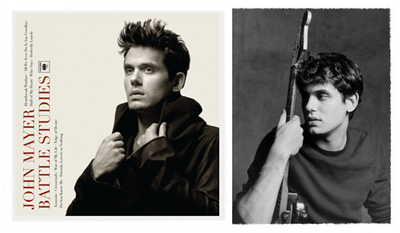 Battle Studies by John Mayer. I really like his voice. By the way one of his songs in this album, Half of My Heart is featured with Taylor Swift!
Sony Music Malaysia has their official Twitter page and Facebook fan page.

I didn't know anything about them actually. Luckily, there are some bloggers who love to share nice goodies with their readers out there and luckily i'm hardworking enough to check out their new updates.

So, i have just joined both their Twitter and Facebook fan page. When i was viewing their Twitter page, i can't help noticed that they really have been giving out free goodies. Oh why had i missed that. :(

I’ve join Sony Music Malaysia’s Facebook page and it’s pretty happening. Our Malaysian Sony Music is just as awesome as the one in US. There’s always updates from them so you’ll know the latest happenings - concerts, album releases and what nots.

Oh and not to mention, they’re very generous as well - always giving away goodies like CDs, movie passes and all sorts of other Sony Music merchandise. I’m always hoping for Britney stuff stuff from my favourite artists to be given away. Ahem *cough*

Talking bout goodies, Sony Music is giving everyone something and the best part is.. IT’S FREE!

Note: Applicable for Malaysians in Malaysia only.

All my fellow friends, what are you waiting for? :D
Join their facebook fan page now to get all the F R E E goodies!
To win free 2 cds, you gotta write a post in your blog. Just like what i'm doing. Details see here. 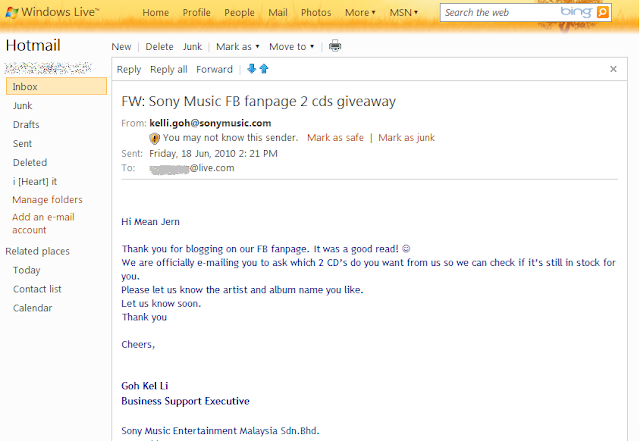 Click on the image to get a better view.